For all Manchester United’s problems since Sir Alex Ferguson retired nine years ago, it has never been as bad as this. United’s final furlong of the season has often offered some level of intrigue: in 2016, they were in the FA Cup final. In 2017 and 2021, they were in Europa League finals. In 2020, they defeated Leicester on the final day to leapfrog them into the top four.

This season, United went into their final game of the season merely hoping to ensure they would finish with a positive goal difference (they didn’t manage it) and avoid dropping into the Europa Conference League, which represents an astonishing underperformance considering United finished second the previous season, then added Cristiano Ronaldo (the greatest goalscorer in international history), Raphael Varane (one of the most decorated centre-backs of the last decade) and Jadon Sancho (the best winger in the Bundesliga). Amazingly, a popular analysis of United’s malaise has been that the players aren’t good enough.

No — the reason is disastrous management. There’s a reason these players all looked better for their previous clubs or their national sides. At a time when rivals have recruited managers previously in charge of clubs such as Barcelona, ​​Bayern Munich, Dortmund, Paris Saint-Germain, Juventus, Chelsea and Inter Milan, Manchester United appointed two men who had most recently been the manager of Molde and the director of football from Lokomotiv Moscow — the type of CVs that might qualify you for an interview at a middling Championship club. Ole Gunnar Solskjaer at least steadied the ship as a caretaker manager. Ralf Rangnick has not.

The Rangnick era must be the most peculiar thing that has happened in the history of Manchester United; entrusting the running of the team to a mysterious figure who had essentially given up on management a decade ago. His influence on German football shouldn’t be underestimated, but being a tactical revolutionary and a competent football manager are two very different things. Much was made of Rangnick’s influence on Jurgen Klopp and Thomas Tuchel, but it’s worth examining precisely what they said.

“There was the belief in those days that the defenders follow their strikers wherever they go,” said Tuchel of Rangnick’s legacy. “He was very early a leader in bringing zonal marking and pressing and the line of a back four into German football and still being aggressive. He was one of the pioneers to introduce a 4-4-2 and high pressing. So tactically he is an elite manager with Pep Guardiola and Jurgen Klopp and Antonio Conte.”

But this largely happened in the previous century and is now second nature. It’s largely what Roy Hodgson did in Sweden a couple of decades beforehand. There’s a huge jump to Rangnick being an “elite manager” alongside three coaches who have all won league titles in multiple countries. At the top level of management, Rangnick has won one DFB-Pokal in Germany — so his honors list is comparable to that of Harry Redknapp. Being historically influential doesn’t truly count for anything when it comes to getting results.

And Rangnick’s results speak for themselves: a lower win rate at United than David Moyes. But even more striking has been the lack of improvement in style. Rangnick was heralded as the pressing master, the man who would guide United towards their future proactive approach. Absolutely nothing has changed. In terms of opposition passes per defensive action (PPDA, a decent measure of pressing), United ranked 14th in the league under Solskjaer and 14th under Rangnick. Between mid-February and May, they just won two of their nine league games, both disjointed team performances saved by Ronaldo hat-tricks. It’s tough to imagine a type of football further removed from the cohesive style Rangnick used to speak about in interviews. 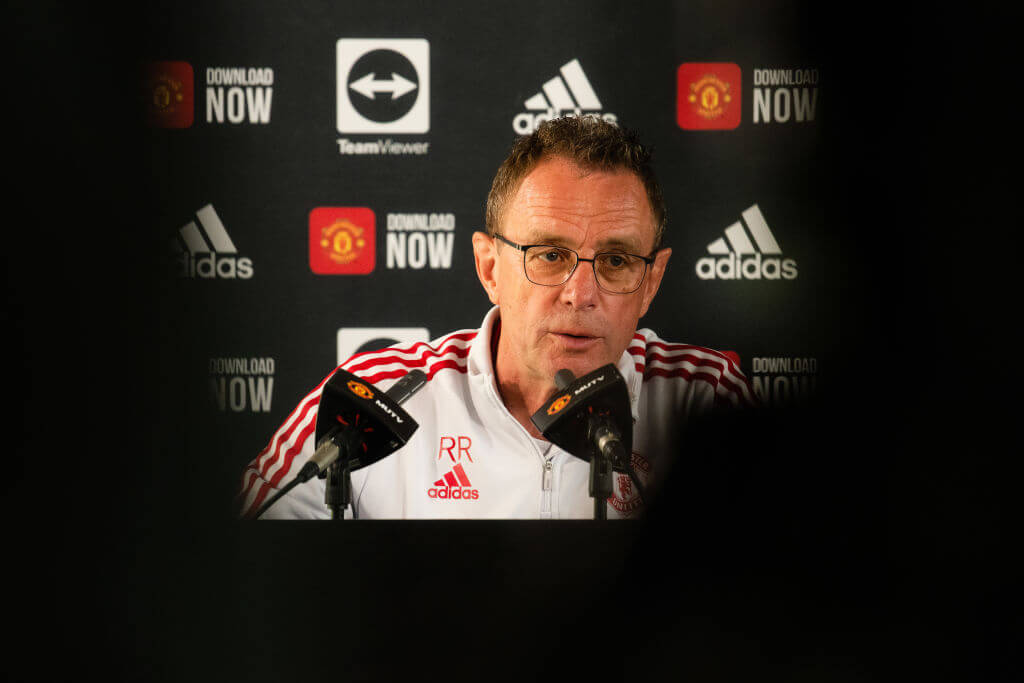 “Cristiano scored a few goals but, again, Cristiano — and I’m not blaming him at all, he did great in those games — but he’s not a pressing monster,” Rangnick complained this week. “He’s not a player — even when he was a young player — he was not a young player who was crying, shouting: ‘Hooray, the other team has got the ball, where can we win balls?’.”

Rangnick seems absolutely baffled that a player might not think, “Hooray, the other team has got the ball.” Top-class players tend to prefer it when their own side have the ball.

Aside from an energetic first half in his opening game — in hindsight, a classic “new manager bounce” — Rangnick didn’t improve Manchester United.

He initially insisted on a 4-2-2-2, which clearly didn’t suit his players, then abandoned it quickly. His one shift to a three-man defence, away at Liverpool, featured bringing in Phil Jones for his first start in three months. It proved disastrous within the opening five minutes. Jones unsurprisingly struggled in a high defensive line, lacking the pace to sprint back and cut out Mohamed Salah’s assist for Luis Diaz’s opener… 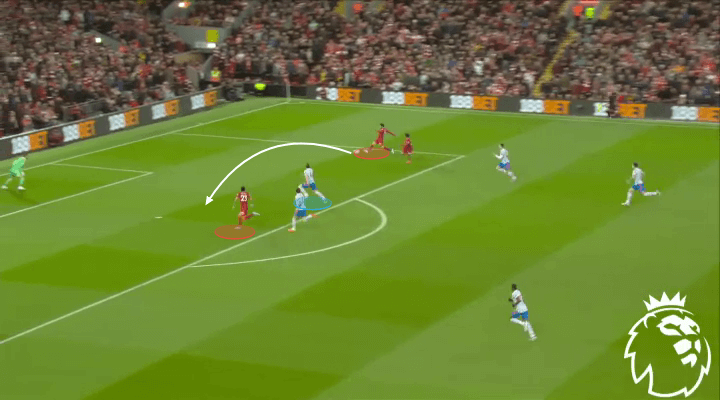 … and then found himself dragged out of the defense as Salah added the second. 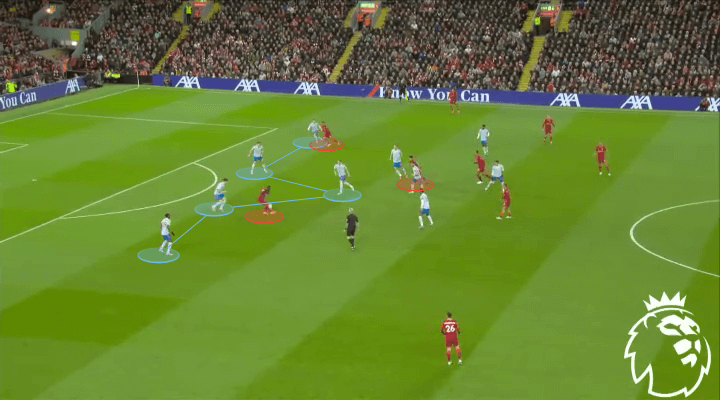 Rangnick reverted to a back four at half-time, and Jones was hauled off and did not start again. It was disastrous tactically and even worse in terms of man-management.

He also played Bruno Fernandes and Paul Pogba as, essentially, forwards in a 4-4-2 against Manchester City and found that his deeper midfield duo were overrun. Kevin De Bruyne found oceans of space for the opener. 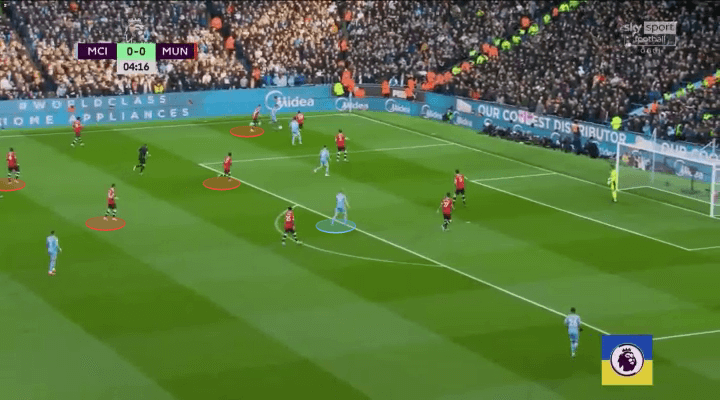 The defensive shape hasn’t improved. At times, particularly in a 1-1 home draw to Chelsea, United were more open than they ever were under Solskjaer. The front four pressed… 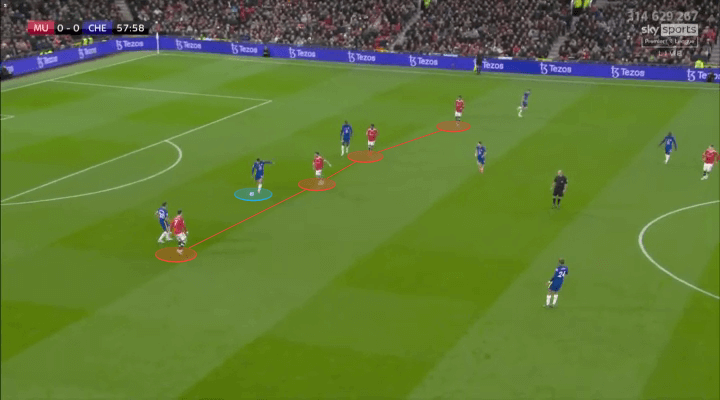 … and the other six stood off. 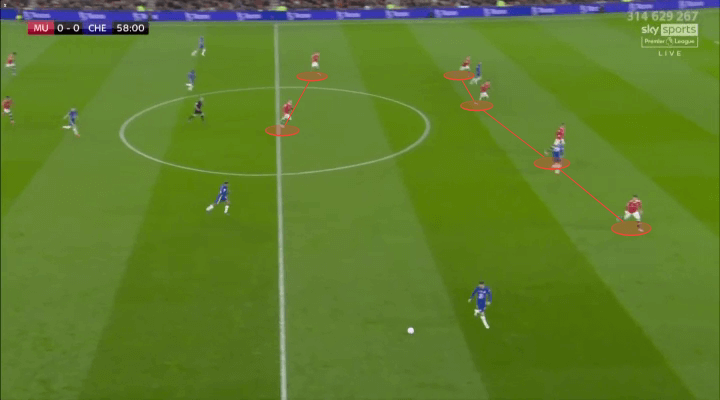 The space in midfield afforded to Chelsea was incredible for any manager, let alone one whose primary intention is creating a cohesive pressing unit.

Rangnick arrived with minimal pedigree as a manager. His achievement in taking up Hoffenheim and establishing them in the Bundesliga was clearly impressive, perhaps comparable to what Sam Allardyce did at Bolton Wanderers. Hoffenheim, though, operate outside German football’s traditional financial constraints. The same, in a different manner, goes for RB Leipzig. That is the main reason they rose from nowhere into the Champions League and while Rangnick’s behind-the-scenes work may have been a contributory factor, it’s still hardly great preparation for actually managing Manchester United.

Ultimately, a huge red flag was that, in the decade before Manchester United appointed Rangnick, he had been appointed as a manager twice. The people who appointed him were Ralf Rangnick and Ralf Rangnick. He had been linked with other clubs, certainly, but there’s perhaps a reason none actually appointed him. It was extremely odd that links with Chelsea and AC Milan were put forward as a reason why Rangnick should be taken seriously.

Chelsea looked elsewhere, with Tuchel offering experience of coaching big clubs and big players. Milan were castigated for short-termism when abandoning their plan to appoint Rangnick and sticking with Stefano Pioli on the basis that he was doing a good job. But why not? Seeing results on the pitch is more convincing than being entertaining on The Coaches’ Voice. Paolo Maldini, the club’s technical director, was appalled by Rangnick’s conduct. “Before learning Italian, he should learn the concept of respect,” he said.

Sure enough, both clubs went on to better things: Chelsea became champions of the world and Milan have completed a remarkable turnaround to win Serie A† If there’s a lesson from these tales, it’s to avoid Rangnick — particularly in the case of Milan, where he seemed to be insisting on a grand role that involved him acting as an old-school British-style general manager, almost coach and director of football combined. 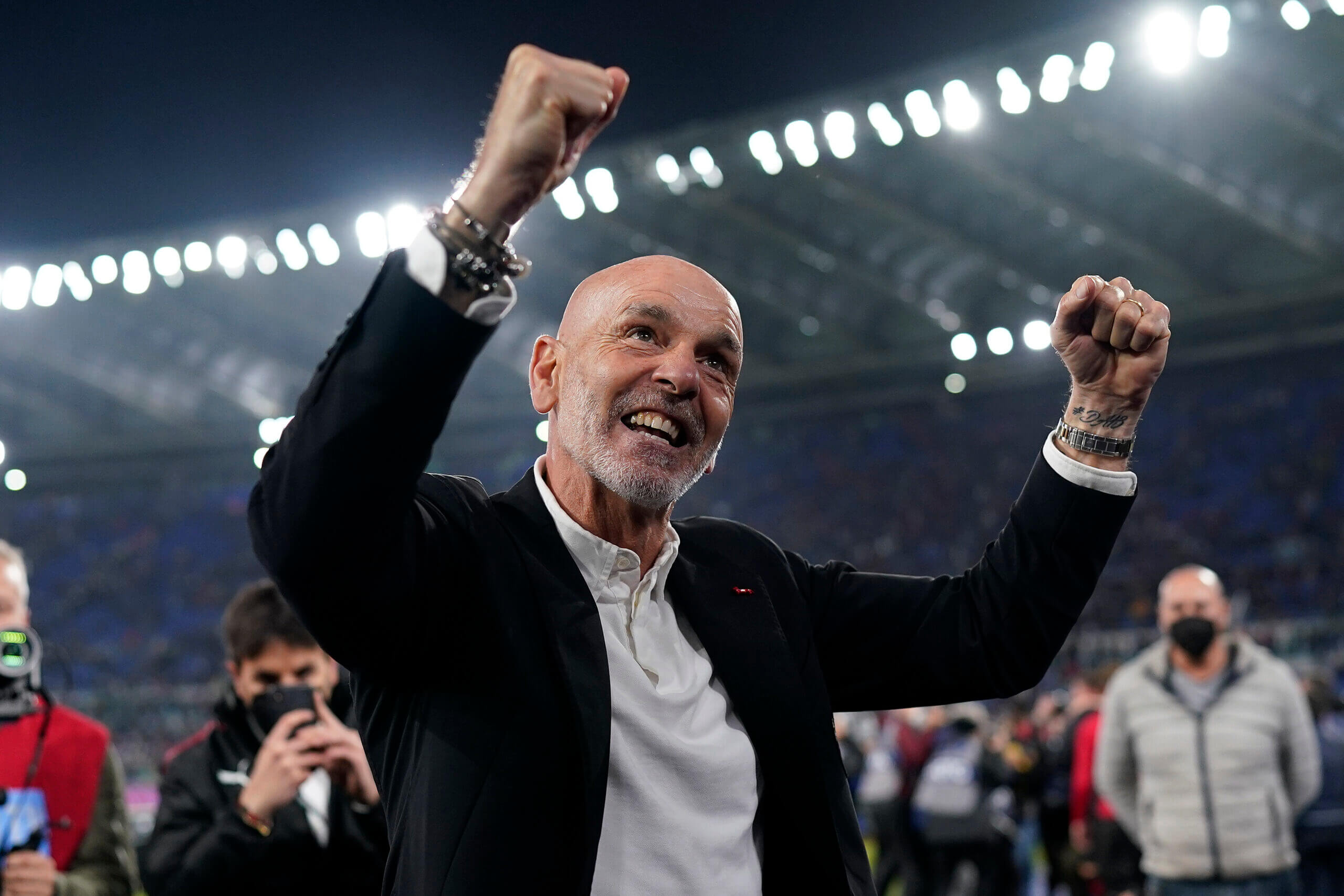 This is where those branding Rangnick as “modern” made the least sense. He is perhaps the last manager in Europe who demands control of everything; he speaks about the importance of a director of football and yet can’t work out whether or not he is one. In that sense, Rangnick was distinctly old-school and yet was still described as “modern”, presumably because he was modern two decades beforehand.

The most ludicrous thing about this is that everyone acknowledged the structure at Manchester United was already deeply confused, yet many believed that involving Rangnick would help. Let’s break this down: Rangnick had been working as a long-term director of football but was appointed as a short-term coach (strange in itself), given some level of influence over who would be his successor (even stranger), although he threatened to appoint himself (still following?) and then would be retained as some form of consultant, although his actual role was never revealed, was probably never worked out, and possibly will not even exist (let’s move on).

The major error in all this is the refusal to acknowledge that football management is fundamentally about dealing with players, with people. You prove your capability by managing week in, week out. Dealing with the setbacks, working with individuals, keeping team spirit high and acting as the figurehead. Klopp and Guardiola are revolutionary tacticians but also excellent leaders, and they’ve proved it near-constantly over the last decade. So have several others, not on Klopp and Guardiola’s level, but far more qualified than Rangnick.

Rangnick, on the other hand, spent the best part of a decade not managing, and that’s why appointing him as first-team manager was one of the oddest things any Premier League club has ever done. The whole thing about Rangnick, the thing that made him such a fascinating story, was that he exerted a major influence on football despite never being a top manager. The final part of that became forgotten but is now clearer than ever.