The Green Bay Packers made a surprise move by selecting Georgia linebacker Quay Walker with their first pick in the 2022 NFL draft. It had nothing to do with the player but instead the fact that this organization had not drafted an off-ball linebacker in the first round since AJ Hawk in 2006. Now Walker’s selection has everyone excited about what this defense will look like when led by one of the best linebacking corps in the NFL.

Walker is expected to start right away alongside De’Vondre Campbell, who, coming off an All-Pro season, signed a five-year $50 million contract this offseason. Campbell’s long and lucrative deal also factored into the surprise around Walker’s selection, however, Green Bay has a plan to get the most out of their two studly linebackers.

Naturally, the expectation is for first-round picks to play a good amount in year one. That is a fair expectation for Walker, who should replace Krys Barnes’ 527 snaps on defense last season. Quite honestly, it would be surprising if he did not exceed Barnes’ 2021 snap count.

Walker is an impressive athlete at 6-4,241 pounds. He possesses 4.5 speed and has a wide range of skills that will make it easier for the team to keep him and Campbell on the field at the same time in 2022.

“It’s been a while since we’ve been able to stay in certain packages with two inside ‘backers and handle everything in run defense and the passing game. This really gives our defense a ton of flexibility,” Brian Gutekunst said during the draft.

Hence why Walker is such a good fit. He will allow the Packers to do certain things they haven’t been able to do in a very long time. Right away, we will see the defense come out in more nickel, and possibly more base, during certain situations next season.

“Every defensive coordinator would love to have two guys that can really run and do the things that the guys that we have can do now, with Quay and Dre,” Gutekunst said. “There’s an ability now for us to stay in base and nickel in certain situations that maybe we haven’t had.”

Fans will notice an immediate difference between Walker and Barnes. Barnes is no snail, but the size, speed, and explosiveness of an undrafted free agent won’t compare to that of a first-rounder. Walker was one of the rankiest tacklers in this year’s draft and also one of the most sure-handed. According to Pro Football Focus, he missed only seven tackles on 137 attempts in four seasons at Georgia. Expect a downhill presence against the run, with Walker bringing the ball carrier down after making contact. He probably won’t replace Campbell as the team’s leader in tackles, but he should lessons the load. Ideally, Walker will come close to or exceed Barnes’ 81 tackles from a year ago.

Not only will fans notice a difference in Green Bay’s run defense, but they will also see a difference in coverage. It was not uncommon for Walker to effectively cover underneath routes in college, meaning the Packers have not one but two three-down linebackers.

Campbell was consistent in coverage all of last season, allowing an NFL passer rating of 87.8. Campbell flashed his playmaking when dropping back with two interceptions and five pass defenses. He finished third among linebackers in coverage snaps. It will likely take time for Walker to reach Campbell’s level of consistency, but he should be able to hold his own even as a rookie.

Similar to Campbell, Walker should have no issues manning up against running backs, tight ends, and even some big slot receivers. When playing zone, he is instinctive and active, with a good understanding of where to be on the field. Walker failed to record an interception in college, so his ball skills are still in question, but he won’t be a liability in coverage.

Another area where Walker can contribute immediately in his first season is on special teams. The Packers are making this a point of emphasis under new special teams coordinator Rich Bisaccia following last year’s showing against the San Francisco 49ers in the playoffs.

At Georgia, Walker played 464 career special teams snaps and was even named Special Teams Newcomer of the Year as a freshman in 2018. Walker’s versatility will easily carry over to what is hopefully a revitalized special teams unit in Green Bay.

Overall, it’s fair to expect big things from Walker right out the gate as one of the most pro-ready rookies on the team. 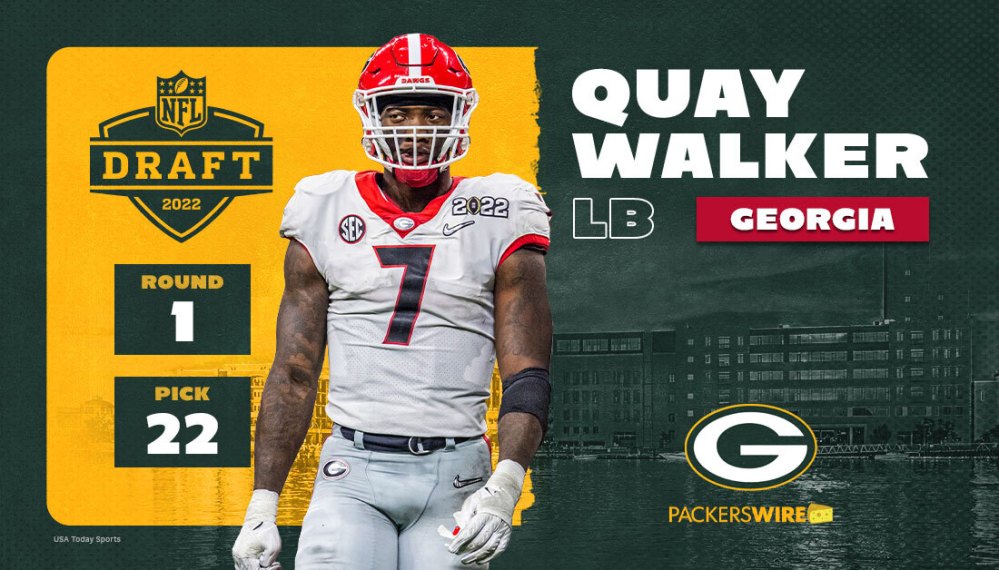