Huge asteroid TWICE the size of the Burj Khalifa, the world’s tallest building, will pass Earth on Friday – and is the biggest space rock to come our way in 2022

By Shivali Best For Mailonline

Measuring just over a half a mile (2,722ft) tall, the Burj Khalifa has been the tallest building in the world since it was built in 2004.

But Dubai’s enormous building pales in comparison to an asteroid that’s set to pass Earth this week.

While NASA has classed the asteroid as ‘potentially hazardous’, it’s extremely unlikely to pose a threat to our planet, passing by at a distance of about 2.5 million miles (4 million kilometers).

To put that into context, that’s nearly 10 times the average distance between Earth and the Moon. 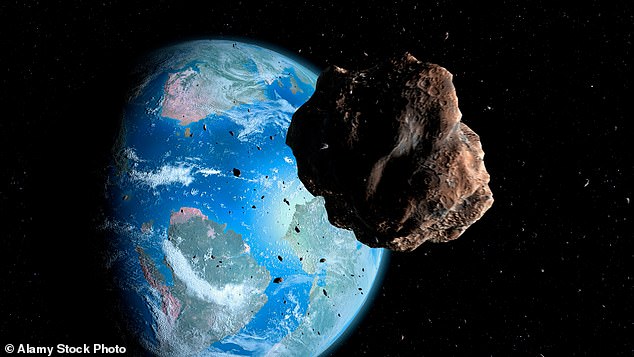 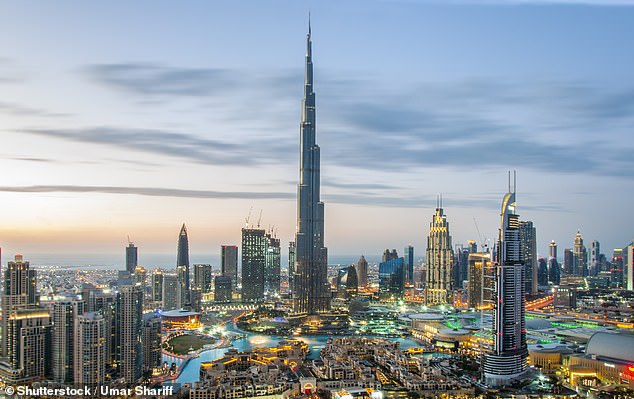 Dubai’s enormous Burj Khalifa stands at just over 0.5 miles tall, but pales in comparison to an asteroid that’s set to pass Earth this week

What is a ‘potentially hazardous’ asteroid?

A potentially hazardous asteroid (PHA) is an asteroid whose orbit comes nearer than 0.05AU (about 7.5 million km) to the Earth.

The International Astronomical Union claims there are around 1,500 potentially hazardous asteroids.

Although these are not a risk to Earth as of yet, asteroid this large have the potential to cause devastation if they were to land on our planet, especially in highly-populated areas.

The asteroid will make its closest approach to Earth at 14:26 UTC on Friday, according to NASA’s Center for Near Earth Object Studies, which tracks space rocks.

At that point, the asteroid will be 0.026 astronomical units (2.5 million miles) from Earth and traveling at a staggering speed of roughly 29,348 miles/hour.

While the chance of this asteroid hitting Earth is extremely low, NASA hasn’t written off the chances of an asteroid collision in the near future.

NASA discovers around 30 new ‘near-Earth objects’ (NEOs) every week, and at the start of 2019 had discovered a total of more than 19,000 objects.

However, the space agency has warned its NEO catalog isn’t complete, meaning an unpredicted impact could occur at ‘any time.’

NASA explained: ‘Experts estimate that an impact of an object the size of the one that exploded over Chelyabinsk, Russia, in 2013 – approximately 55 feet (17 meters) in size – takes place once or twice a century.

‘Impacts of larger objects are expected to be far less frequent (on the scale of centuries to millennia).

‘However, given the current incompleteness of the NEO catalog, an unpredicted impact – such as the Chelyabinsk event – ​​could occur at any time.’

To help prepare for such an impact, NASA recently launched its first ever ‘planetary defence’ spacecraft to deflect an asteroid 6.8 million miles from Earth.

The probe will smash into the small asteroid Dimorphos, which orbits a larger asteroid called Didymos, at 15,000mph (24,100km/h) in September 2022.

When the 1,210lb space probe hits Dimorphos, the plan is for it to change the speed of the ‘moonlet’ by a fraction of a per cent, echoing the plot for the Bruce Willis movie ‘Armageddon’.

Although the 525ft-wide space rock doesn’t pose a danger to Earth, NASA wants to measure the asteroid’s altered orbit caused by the collision.

This demonstration of ‘planetary defence’ will inform future missions that could one day save Earth from a deadly asteroid impact.

WHAT IS THE NASA DART MISSION?

DART will be the world’s first planetary defense test mission.

It is heading for the small moonlet asteroid Dimorphos, which orbits a larger companion asteroid called Didymos.

When it gets there it will be intentionally crashing into the asteroid to slightly change its orbit.

While neither asteroid poses a threat to Earth, DART’s kinetic impact will prove that a spacecraft can autonomously navigate to a target asteroid and kinetically impact it.

Then, using Earth-based telescopes to measure the effects of the impact on the asteroid system, the mission will enhance modeling and predictive capabilities to help us better prepare for an actual asteroid threat should one ever be discovered. 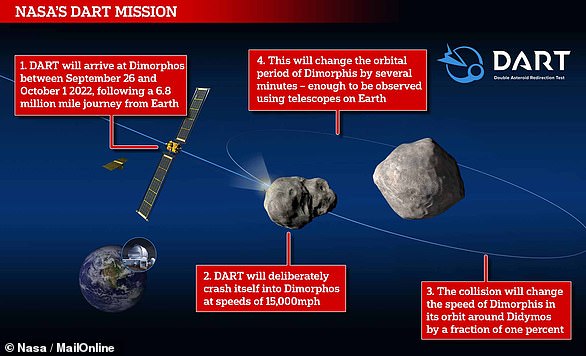 DART will arrive at Dimorphos in October 2022, where it will deliberately smash into the asteroid at speeds of 15,000mph. This collision will change the speed of Dimorphos in its orbit around Didymos by a fraction of one per cent, changing the orbital period by several minutes