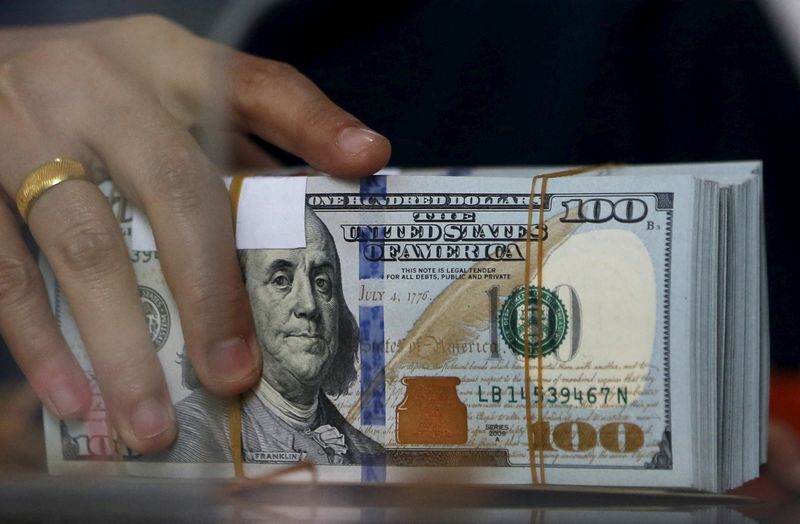 © Reuters. FILE PHOTO: An employee of a money changer holds a stack of US dollar notes before giving it to a customer in Jakarta, October 8, 2015. REUTERS/Beawiharta

LONDON (Reuters) – The euro rallied on Monday as investors sold the dollar on hopes that loosening lockdowns in China could help global growth.

A calmer mood on equity markets in early European trading also pressured the dollar, which fell sharply last week but has been the go-to currency for investors this year when risk assets tumbled and worries about the economy and inflation jumped.

Risk-sensitive currencies rose across the board, with the Australian dollar, which initially showed a muted reaction to the expected victory for the centre-left Labor Party in national elections on the weekend, soaring almost 1%.

Sterling rose 0.5%, while the Norwegian crown also performed well as the sell-off in the dollar that began last week continued into Monday.

“We see this as just a temporary correction (in the US dollar) for now. If we look at the main reasons why the dollar has been strengthening so much in recent months, we don’t think that fundamental story has changed significantly over the past week,” said MUFG analyst Lee Hardman.

“But in the very short term there is a risk that this correction lower could extend further,” he added, pointing to the build-up in long dollar positions in recent weeks that leaves the market vulnerable.

Sentiment around China also helped. Shanghai is edging out of lockdown and an unexpectedly big rate cut in China last week was taken as a signal that authorities are going to provide support.

The yuan had its best week since late 2020 last week and in offshore markets on Monday firmed to 6.6555 per dollar, its strongest level since early May. [CNY/]

Geopolitics are also in focus in Asia this week as US President Joe Biden tours the region, promoting greater US economic engagement and seeking to push back against China’s influence.

Commodity linked currencies fared well. The Norwegian crown rose half a percent versus the euro while the Canadian dollar rallied a similar amount to C$1.2789.

The US dollar has soared this year. But with expectations for aggressive Federal Reserve interest rate hikes priced in, some analysts say further gains may be tougher from here.

“The dollar may be carving out a peak, given Europe’s resilience to the energy shock and potential easing of lockdowns in China,” said Commonwealth Bank of Australia (OTC:) strategist Joe Capurso.

“Given the type of policy support, we expect investment to rebound faster than consumer spending,” he said, adding that investment could support commodity currencies such as the Australian and Canadian dollars, as well as the yuan.