Could sea corals be used to treat CANCER? Scientists discover a ‘holy grail’ anti-cancer chemical in common soft corals off the Florida coast

By Shivali Best For Mailonline

Scientists have taken a huge step forward in the search for a new treatment for cancer, after discovering a ‘holy grail’ natural anti-cancer chemical in common soft corals.

The chemical, called eleutherobin, was previously identified in a rare coral near Australia in the 1990s, but since then scientists have been unable to find it in high enough quantities for use in a lab.

Now, researchers from the University of Utah have discovered the elusive chemical is also produced by common soft corals living off the coast of Florida.

The team now hopes to recreate the soft coral in the laboratory, in the hope of producing the chemical in the large quantities needed for rigorous testing.

One day, the chemical could be used as a new tool to fight cancer, according to the team.

Scientists have taken a huge step forward in the search for a new treatment for cancer, after discovering a ‘holy grail’ natural anti-cancer chemical in common soft corals (pictured)

Eleutherobin is used by soft corals as a defense against predators, with the chemical disrupting the cytoskeleton – a key scaffold in cells.

However, laboratory studies have shown that the compound can also inhibit the growth of cancer cells.

Having grown up in Florida, Dr Paul Scesa, first author of the study, suspected corals in the area might contain the elusive chemical.

Dr Scesa brought small live samples of corals from Florida to the laboratory in Utah, where the real hunt began.

While previous studies have suggested that eleutherobin is made by symbiotic organisms living inside corals, the researchers suspected this wasn’t the case. 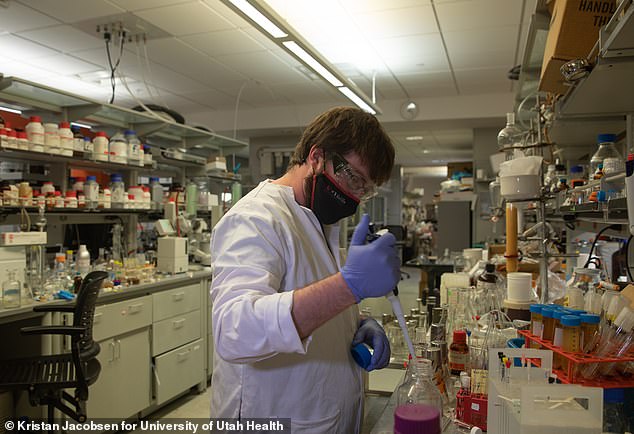 Having grown up in Florida, Dr Paul Scesa (pictured), first author of the study, suspected corals in the area might contain the elusive chemical 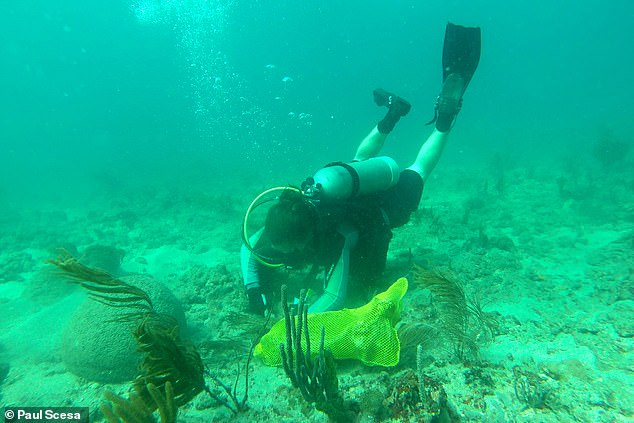 Dr Scesa brought small live samples of corals from Florida to the laboratory in Utah, where the real hunt began

In the laboratory, the researchers set out to understand whether the coral’s genetic code carried instructions for making the compound.

This proved difficult, as the scientists didn’t know what the instructions for making the chemical should look like.

“It’s like going into the dark and looking for an answer where you don’t know the question,” said Professor Eric Schmidt, co-lead author of the study.

To address this issue, the researchers looked for regions of coral DNA that resembled genetic instructions for similar compounds from other species.

They then programmed bacteria grown in the lab to follow coral DNA instructions specific to the soft coral, and found they were able to replicate the first steps for making the chemical.

According to the researchers, this proves that soft corals are the source of eleutherobin.

The team now hopes to fill in the missing steps of the chemical’s recipe, and try to replicate them in the laboratory.

‘My hope is to one day hand these to a doctor,’ Dr Scesa added.

‘I think of it as going from the bottom of the ocean to bench to bedside.’

Corals have a symbiotic relationship with a tiny marine algae called ‘zooxanthellae’ that live inside and nourish them.

When sea surface temperatures rise, corals expel the colorful algae. The loss of the algae causes them to bleach and turn white.

This bleached states can last for up to six weeks, and while corals can recover if the temperature drops and the algae return, severely bleached corals die, and become covered by algae.

In either case, this makes it hard to distinguish between healthy corals and dead corals from satellite images.

This bleaching recently killed up to 80 per cent of corals in some areas of the Great Barrier Reef.

Bleaching events of this nature are happening worldwide four times more frequently than they used to.

An aerial view of Australia’s Great Barrier Reef. The corals of the Great Barrier Reef have undergone two successive bleaching events, in 2016 and earlier this year, raising experts’ concerns about the capacity for reefs to survive under global-warming