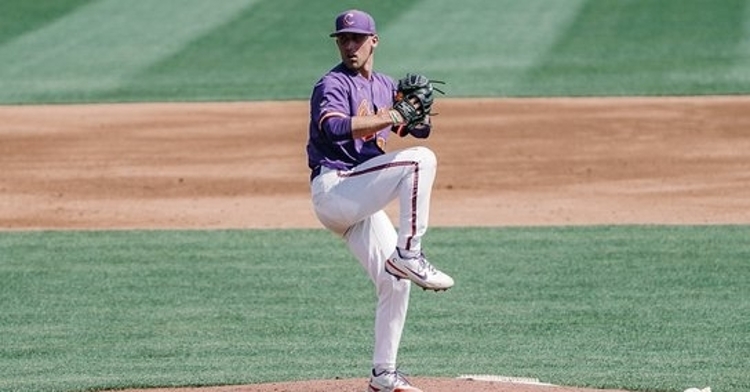 Geoffrey Gilbert put together a strong start while the Tiger offense heated up. (Clemson athletics photo)

CLEMSON – Clemson baseball’s season was extended at least one more week on Friday, and the result kept things on track for another possible season extension to come.

Monte Lee‘s Tigers clinched an ACC Baseball Championship spot in Charlotte next week with a 6-2 win over Boston College. Depending on results Friday night and Saturday, Clemson (34-21, 12-16 ACC) can finish as high as a 10-seed in the 12-team field, but it is currently in the No. 12 spot as of Friday afternoon.

The Tigers are also projected as one of the last teams to make the NCAA Tournament field currently and every win counts, looking for a series sweep in the 11 am start on Saturday.

Clemson was ranked No. 27 in the NCAA-used RPI ranking as of late Friday afternoon.

“We told the guys after the game that we’ve accomplished one thing,” Lee said. “We’ve accomplished getting into the ACC tournament but our work is not done. We’re still trying to work on our resume to get into the NCAA Tournament. A win tomorrow is a huge deal for us because it could potentially — obviously with other games and other RPI factors in there — it could keep us underneath that 30 (ranking) number, which is critical with 13 (conference) wins when you look at the case precedent of teams that have gotten in with 13 (conference) wins into the NCAA Tournament.

“It is big for us (the ACC tournament berth), we give ourselves a chance now. Very proud of our team being able to do that and we get a chance to keep playing.”

After a 15-1 win on Thursday, the runs were harder to come by early in the Friday afternoon heat.

BC’s Cameron Leary hit a towering solo home run to right field to get the Eagles (19-33, 5-24) on the board first, but Clemson left-hander Geoffrey Gilbert settled down from there, allowing only two more hits over the next four frames without another run.

That gave his offense some time to get going, and riding a hot streak from his return to the lineup Thursday, Cooper Ingle kept his run going with an RBI double off the top of the left field wall to tie up the game in the first inning.

Bryar Hawkins made it back-to-back games with a home run to extend the Clemson lead to 3-1 through four innings.

Gilbert (5-2) got the hook in the sixth frame after giving up another solo shot to right field, finishing with five strikeouts, four hits allowed and one walk in 5 2/3 innings.

ACC player of the year candidate Max Wagner picked him up in the seventh inning with a three-run homer to make it 6-2 Tigers. It was Wagner’s 26th homer of the season to bring him within one of the single-season record and in second by himself in the record books. He also homered on Thursday.

“We had to fight today. We didn’t necessarily tear the cover off the baseball, but man did we take advantage of some opportunities when we got them,” Lee said.

Freshman right hander Austin Gordon finished with 3 1/3 shutout frames with seven strikeouts for the save (2). Over two games in the series, Clemson relief pitching has shut out the Eagles over 5 1/3 innings with three pitchers.

Gordon also worked with Gilbert for a big win last Sunday at Virginia.

“When you look at where we were at and what we needed to do to get into the ACC Tournament, we needed to have big starts,” Lee said. “We have been saying it all year long. We swing the bats with anybody in the country. When we get good starts on the mound and we shut the other team down to give our offense a chance to score runs, we can beat anybody in the country. We’ve won Gilbert’s start against Virginia and he stepped in a big, big way after losing the first game, we needed to get a win in Virginia. today.”

“I see just electric stuff. He’s kind of a late-bloomer,” said Lee of Gordon’s impact down the stretch. “We thought he was going to be really good when we looked at him in the fall. He certainly wasn’t showing the velocity that he has now, but he had two breaking balls and he’s very tall and projectable and a super-athletic kid The velocity has just continued to climb.

“We thought he was going to be a guy for us, it was just a matter of time…He’s certainly making some jumps in the last half of the season that are pretty eye-opening. He has a chance to be special for us.”

Clemson will hold a Senior Day ceremony at 10:30 am on Saturday.

COOOOOP is on??@IngleCooper takes the ball the other way for a double to score @willtaylor_10 as the tigers tie the game??

Hawkins hits his ??th homer of the year and extends his hitting streak to ???? games????

Regularly scheduled tweet for a @mdwagz9 †@mdwagz9 launches his ????th homer of the year and moves into sole possession of second place for home runs in a single season in Clemson Baseball history??