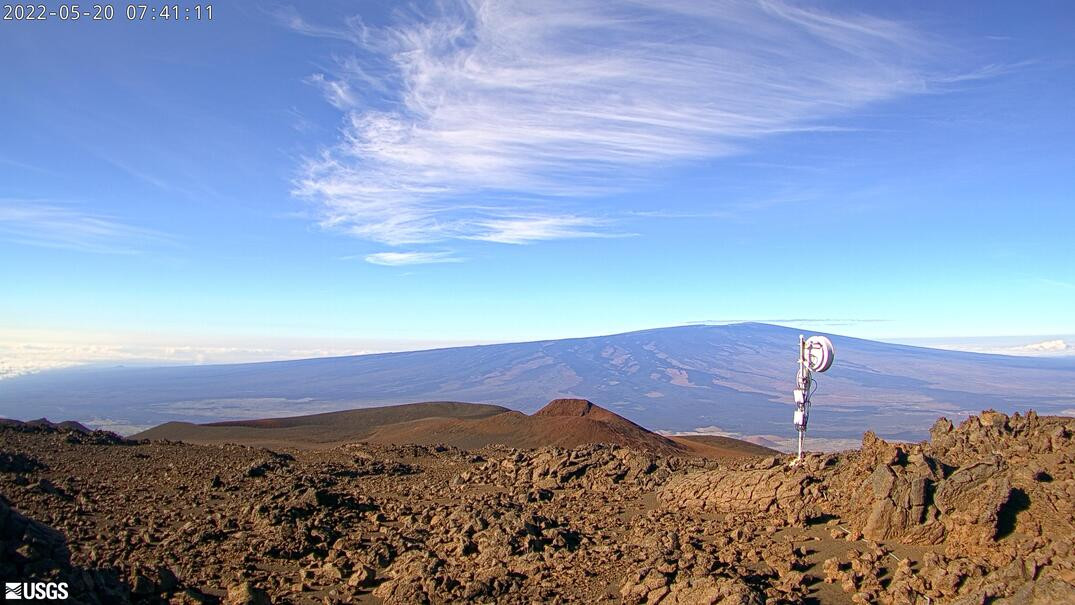 USGS webcam on Maunakea showing Mauna Loa in the distance. Image taken on May 20, 2022.

(BIVN) – The two-week eruption of Mauna Loa volcano in 1916 is examined in this week’s Volcano Watch article, written by US Geological Survey Hawaiian Volcano Observatory scientists and affiliates.

From the Volcano Watch article:

The year 1916 not only marked the birth of Hawaiʻi Volcanoes National Park, but also is remembered for the eruption of the Honamalino flow from the Southwest Rift Zone (SWRZ) of Mauna Loa 106 years ago.

The eruption began on May 19th, 1916, and was brief, lasting less than two weeks, but it offers lessons for future Mauna Loa eruptions.

dr. Thomas Jaggar, who had founded the Hawaiian Volcano Observatory a mere four years earlier in 1912, attempted to forecast the next Mauna Loa eruption based on the pattern of rift zone eruptions on the volcano since 1868. The previous rift eruptions alternated locations between the Northeast Rift Zone (NERZ) and the SWRZ though these were frequently separated in time by eruptions confined to Mauna Loa’s summit caldera (Moku’āweoweo).

Mauna Loa had erupted in 1907 from the SWRZ and in 1914–15 from the summit. Therefore, dr. Jaggar hypothesized that the next Mauna Loa flank eruption would occur from the NERZ, assuming the prior pattern meant there was an underlying reason for the alternation of rift eruption sites.

The May 19, 1916, SWRZ outbreak deviated from the pattern of eruptions Dr. Jaggar had observed at Mauna Loa, suggesting that the eruption probability might be more like a “coin flip” model. While the long-term odds for flipping heads and tails are equal, it doesn’t mean you can’t flip four tails in a row.

Like many eruptions on the Island of Hawai’i, the May 19th, 1916, eruption was preceded by earthquake activity. Residents of Ka’ū felt numerous earthquakes early in the morning before an impressive steam plume, visible from Kīlauea’s summit, rose high up on Mauna Loa’s SWRZ at about 7:15 am, marking the start of the eruption. Activity in this high-elevation area, technically considered the summit region, lasted less than 24 hours.

Later, another swarm of earthquakes shook Ka’ū residents as lava intruded the SWRZ resulting in a line of fissures opening on the lower SWRZ on the evening of May 21. Lava from the vents spread over the crest of the rift zone feeding lava flows on either side – the Honomalino flow moving down the steep southwest side and the larger Kahuku flow spreading more widely to the southeast. 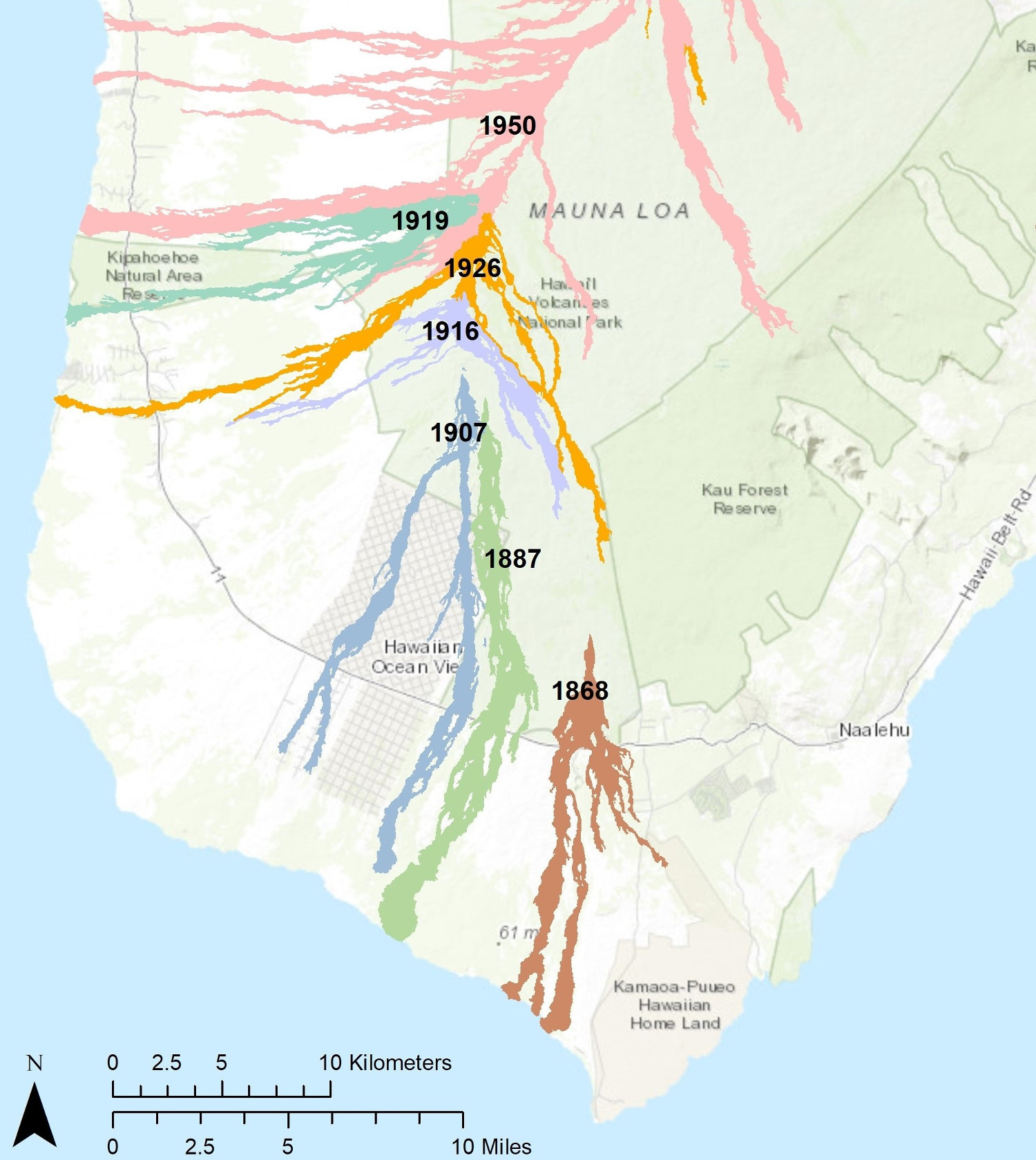 The branched nature of the 1916 eruption—with the eruption supplying lava flows on either side of the rift zone—coupled with the relatively small total erupted volume ensured that the lava flows did not travel very far. Only one homestead (the Bertlemann’s) was destroyed during the 1916 eruption, which ended on May 31.

The 1916 eruption was followed in relatively rapid succession by Mauna Loa’s 1919 and 1926 SWRZ eruptions with no intervening eruptions. During both eruptions, lava flows reached the ocean and destroyed Hawaiian coastal villages (Alika and Hoʻōpūloa). The 1919 and 1926 lava flows would have cut Highway 11 and caused severe disruptions for current residents. The village of Miloliʻi and its boat access were narrowly missed by the 1926 flow.

Several other lava flows from Mauna Loa’s SWRZ, including in 1868, 1887, and 1950, have also traveled quickly through this region, crossing roads and entering the ocean, sometimes within a matter of hours of the vent opening.

The 1950 eruption on the SWRZ was the largest recorded Mauna Loa eruption and fed flows on either side of the rift zone crest like the 1916 eruption. In a contrast to the 1916 eruption, three lava flows erupted in 1950 entered the ocean within less than 24 hours of that eruption starting. A repeat of the 1950 eruption is of great concern today due to the increased population of the area.

What can we learn from Mauna Loa’s 1916 eruption? Though eruptions and volcanoes exhibit patterns, they do not always follow them. While repeats of most recorded SWRZ eruptions would at a minimum cut off Highway 11, the smaller 1916 eruption demonstrates this is not always the case.

Over the past 200 years, Mauna Loa rift zone eruptions are evenly divided between the SWRZ and the NERZ. However, the remarkable run of four SWRZ eruptions in a row (1907, 1916, 1919, 1926) shows the weakness of long-term normal probability models in forecasting eruptions in the short term. It’s a constant reminder that none of us should grow complacent living on our volcanic island.