There’s a momentous roster shakeup in St. Louis, as the Cardinals are set to welcome two of the game’s top prospects to the big leagues in the coming days. As first reported by Derrick Goold of the St. Louis Post-Dispatch (Twitter left), the team has promoted both Nolan Gorman and Matthew Liberatore for this weekend’s series against the Pirates. Katie Woo of the Athletic tweets that outfielder Tyler O’Neill is headed to the 10-day injured list because of a right shoulder impingement in one corresponding roster move.

According to Goold, Gorman will be in tomorrow’s starting lineup at second base. That figures to be his primary role moving forward, with Gold Glove second baseman Tommy Edman kicked to the other side of the bag. Edman has been excellent this season, but the Cards haven’t gotten much production out of their shortstops. Paul DeJong struggled enough the team optioned him to Triple-A Memphis last week, seemingly setting the stage for a forthcoming Gorman promotion.

That’s not to say the Cardinals hastily promoted Gorman to compensate for struggles at the major league level — far from it. The left-handed hitter has forced his way to the majors with an incredible showing in Memphis. Over 147 plate appearances, he’s hitting .308/.367/.677 with an astounding 15 home runs. No other Triple-A batter has more than 13 round-trippers, and only the Cubs’ Robel Garcia has a higher slugging percentage in the International League. 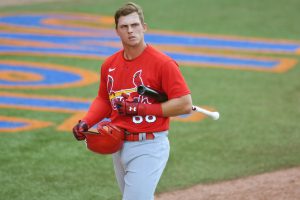 Gorman’s production hasn’t been completely without issue, as he’s gone down on strikes 50 times. That’s a 34% clip, an alarming rate for any minor leaguer considering the higher quality of pitching he’ll face in the majors. Ultimately, however, Gorman’s power production became too much for the St. Louis front office to ignore.

It has been a long-awaited debut for Cardinals fans, who have anticipated Gorman’s arrival since he was selected with the 19th pick in the 2018 draft out of an Arizona high school. Regarded as a power-hitting third baseman as an amateur, he has more or less met those expectations while in the minors. Gorman has consistently posted huge extra-base numbers while running elevated strikeout totals. Prospect evaluators have raised some concerns about the amount of swing-and-miss in his game, but they’ve been unanimously effusive in their praise of his power upside.

Each of FanGraphs, Kiley McDaniel of ESPN, Keith Law of the Athletic and Baseball America slotted Gorman among the game’s top 60 prospects this past offseason. (Law and McDaniel both placed him among their top 20). That was before this season’s home run barrage, which only figures to have raised the 22-year-old’s profile even further. Gorman has kicked over to the keystone in the minors with Nolan Arenado entrenched at third base. He’s not regarded as an elite defender and will certainly be a downgrade from Edman there, but the hope is that his offensive capabilities will more than compensate for any issues on the other side of the ball.

Not to be outshined, Gorman’s draft mate will make his major league debut one day later. Liberatore is lined up to start Saturday’s game against the Bucs, manager Oliver Marmol confirmed to reporters (woo link† The skipper said it’s still to be determined whether there’ll be more than one spot start for the 22-year-old southpaw. Regardless, that Liberatore is now lined up to pitch in the majors suggests he’s firmly on the organizational rotation depth chart.

Liberatore was coincidentally also a first-round draftee out of a Phoenix-area high school the same year as Gorman, and the two have been friends since childhood. Seen as one of the top prep arms in that year’s class, he fell to the Rays at 16th overall because of concerns about his signing bonus — which ultimately checked in just shy of $3.5MM. While Liberatore’s fastball sat in the low-90s, he drew praise for his secondary offerings, particularly a curveball that evaluators consider his best pitch. He pitched well for his first season-plus in the lower levels of the Tampa Bay farm system, then was involved in a January 2020 blockbuster that sent Randy Arozarena back to Tampa Bay. 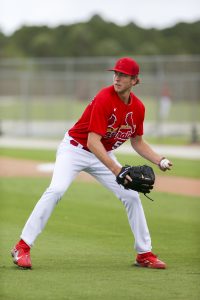 The cancellation of the 2020 minor league season kept Liberatore from making his official Cardinals debut until last year. The organization pushed him straight to Memphis for his age-21 campaign and he held his own, tossing 124 2/3 innings of 4.04 ERA ball with a solid 23.7% strikeout rate and an excellent 6.3% walk percentage. St. Louis assigned him back there to open this season, and he’s made strides from a swing-and-miss perspective. Liberatore’s ERA and walk rate are right in line with his 2021 marks, but he’s improved his strikeout rate by almost five points through his first seven starts.

Liberatore is also regarded by most evaluators as one of the top 100 minor league talents. He’s not seen as a future ace, but between his excellent control and well-rounded arsenal, he’s unanimously viewed as a possible rotation stalwart. Whether the Cardinals plug him into that role immediately isn’t clear, but it seems likely he’ll be taking the ball every fifth day in St. Louis before long.

Neither Gorman nor Liberatore will accrue enough major league service time this year to reach the one-year threshold. Even if both players are in the majors for good, neither will be eligible for free agency until after the 2028 campaign at the earliest. Both players are in good position to reach early arbitration as Super Two qualifiers after the 2024 season, although that’s contingent on sticking in the big leagues from here on out. In Liberatore’s case, in particular, it seems future optional assignments are still a possibility.

The Cards have Adam Wainwright† Steven Matzo† Dakota Hudson† Miles Mikolas and Jordan Hicks as their primary starting five at the moment. Wainwright and Mikolas have been excellent. Matz has struggled but isn’t going to be bumped from the rotation two months into a four-year contract. Hudson doesn’t have great strikeout and walk marks, but he’s riding his typically elite ground-ball production to decent results. That’s more or less also true of Hicks, who has lengthened out into the rotation after a few years as a high-leverage bullpen arm.

Of course, St. Louis has been without arguably their best pitcher for the entire season. Jack Flaherty hasn’t thrown a pitch because of a shoulder issue that required a platelet-rich plasma injection. He’s been on the 10-day injured list all year, and the club announced that he’s been transferred to the 60-day IL to clear space for Gorman on the 40-man roster.

That’s merely a procedural move that keeps Flaherty out for two months from Opening Day. The 26-year-old has yet to embark on a minor league rehab assignment and surely wouldn’t have been ready to make an MLB return before the first week of June anyhow. Flaherty has recently progressed to throwing bullpen sessions, so it seems reasonable he could head out into minor league games within a few weeks.

The club will also need to create a spot on the 40-man roster for Liberatore, with that transaction set to occur before Saturday’s contest. Aside from Flaherty, St. Louis doesn’t have any obvious candidates for a 60-day IL transfer, so it seems likely someone will be designated for assignment within the next two days.

The only disappointing aspect of today’s news is that O’Neill is headed to the IL. He’s missed the past couple days battling the shoulder discomfort that will now cost him at least a week and a half. The team hasn’t provided an indication whether he’s facing an absence longer than the minimal stint.

So continues a rough start to the year for O’Neill, who is just a season removed from an eighth-place finish in NL MVP voting. The 26-year-old has hit just .195/.256/.297 with a pair of home runs across 133 plate appearances, nowhere near the 34-homer output he put forth last season. O’Neill, who also lost his arbitration hearing last week, will try to get back on track whenever he’s healthy enough to make his return.