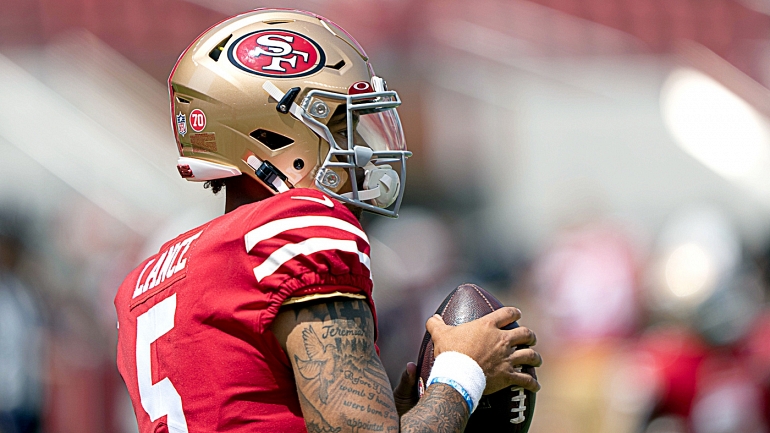 Last year, NBC Sports analyst Chris Simms ranked Trey Lance at no. 38 in his top 40 NFL quarterbacks. The San Francisco 49ers quarterback jumped up the ranking in his second year, but not by much. Simms has last year’s No. 3 overall pick listed at No. 31 in his 2022 quarterback ranking.

Simms admits it was challenging to figure out where to place Lance within his ranking. Lance only started two games during his rookie campaign and played just 178 snaps. Most expect him to be the 49ers’ starter come Week 1. Although, there are certainly those who doubt that will happen.

“I see the talent, the potential, all of that,” Simms said on the Chris Simms Unbuttoned podcast. “There’s no doubt. If you are really into that, and you believe you can groom him and fix him and do some of that, I can get why you take him at No. 3. The arm is ridiculously strong, and he’s a good athlete.”

The 49ers must have felt that Lance could develop into an elite passer. The team didn’t just take him at No. 3 overalls. It traded away multiple first-round picks and a third-rounder to do so.

Simms says he hears how smart Lance is but has yet to see that brilliance on the football field. What does the analyst feel to be the biggest question surrounding Lance?

“I think the accuracy is still the biggest question,” Simms responded. “Just pure ability to be a thrower and a passer. Again, every game was a [expletive] miracle to get back to 50 percent throwing. I mean, it really was. … And I feel like Shanahan had to basically call plays to just go, ‘Let’s get his completion percentage up. Maybe we can end the game at 50 percent.’ I really felt, as I was watching some of the games, that was part of it.”

Simms also questions Lance’s ability to throw catchable footballs, pointing to the drops by his targets last year during the preseason.

“He’s throwing to a receiver [who isn’t that far away], and he’s throwing as hard as he can,” Simms explained. “… It jumps out when you watch on film. … And then, I think what added on to it, you see very few real quarterback plays [where he would] go through the pocket, read it, do all that.

“A lot of his big plays on the stats were what I call Shanahan Specials, where it’s a great throw downfield and all that, but [expletive]he’s wide open by 10 miles.”

Simms doesn’t believe Lance is the best quarterback on the 49ers roster, admitting that he has Jimmy Garoppolo higher than Lance within his ranking. Of course, Garoppolo’s rank won’t be revealed until later, so we don’t know how much higher up he is. Simms does note that the chances of the 49ers starting Garoppolo this season are slim. It would take a significant loss of faith in Lance for that to happen.

“They tried to trade Jimmy Garoppolo, so we know where [their mind is at],” he shared.

Simms believes Lance’s potential is high, which was the narrative surrounding the young quarterback as he entered last year’s draft. The analyst believes that if Lance starts, head coach Kyle Shanahan can hide the quarterback’s deficiencies while highlighting his strengths.

“The 49ers maybe are the best team in football,” Simms added before saying that Shanahan has to start Lance to ensure he develops into the quarterback the 49ers hope he can become. If that happens over the course of this season, Simms believes the 49ers might be a tough team to beat down the stretch.

You can watch Simms’ entire breakdown below.

With the draft behind us, ESPN released its latest power rankings. The list is based on the evaluations from a panel of more than 80 writers, editors, and TV personalities. The Buffalo Bills came out on top, followed by the Super Bowl champion Los Angeles Rams, the Tampa Bay Buccaneers, Kansas City Chiefs, and Green Bay Packers. The Cincinnati Bengals, Los Angeles Chargers, and Dallas Cowboys round out the top eight. The San Francisco 49ers come in at No. 9, one spot lower than their post-free agency ranking. The biggest storyline heading into the offseason was the transition from veteran Jimmy Garoppolo

On Thursday, FanSided national reporter Matt Lombardo tweeted out that the San Francisco 49ers are “continually underwhelmed” by Trey Lance. While most quickly dismissed the report, given the team’s consistent praise of the second-year quarterback, Colin Cowherd offered a reaction on his FS1 show. The longtime host believes it’s time for the 49ers to answer their doubters and go “all in” on their young quarterback. I have heard that the #49ers’ staff has been continually underwhelmed by Trey Lance …

On Thursday morning, Matt Lombardo of FanSided caused a good deal of chatter with a single tweet. It stated that, per his sources, the San Francisco 49ers have been “continually underwhelmed” by the development of now-second-year quarterback Trey Lance. I have heard that the #49ers’ staff has been continually underwhelmed by Trey Lance … https://t.co/BfypDIHzXo— Matt Lombardo (@MattLombardoNFL)

Don’t be surprised to see Brandon Aiyuk breakout with Trey Lance under center in 2022 for the San Francisco 49ers. Just when many of us expected the Arizona State product to take a significant step forward in year two, he clearly began the year as an afterthought in the 49ers’ offense. As a rookie, Aiyuk proved to be the perfect complement to star receiver Deebo Samuel and tight end George Kittle hauling in 60 receptions, for 748 yards, and five touchdowns on 96 targets. Aiyuk also scored a pair of rushing touchdowns on six carries. Last season, the 24-year-old Aiyuk only had 13 receptions on