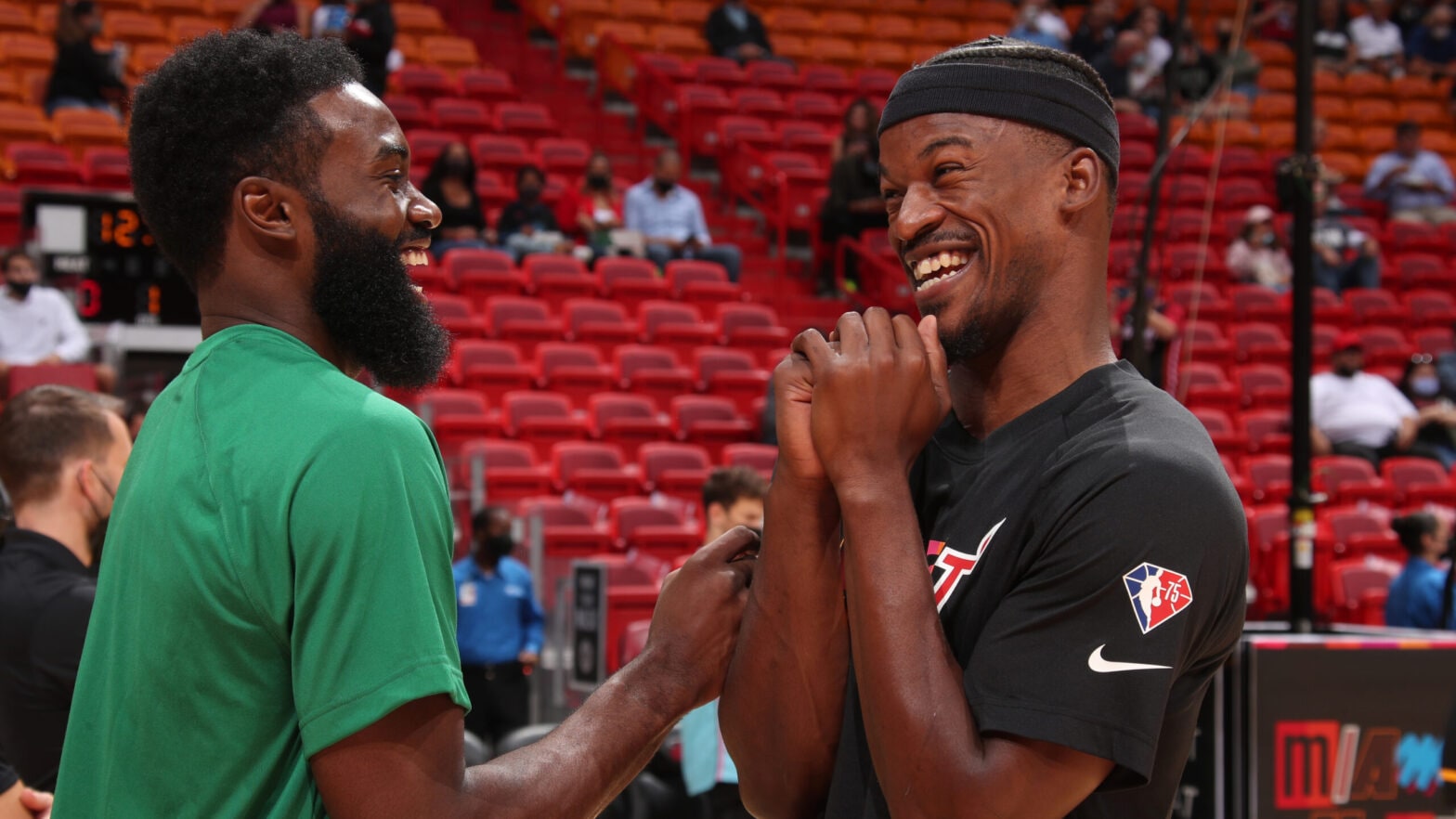 Jaylen Brown has the ability to break out vs. Miami, while Jimmy Butler continues to elevate his numbers in the postseason.

The NBA recently introduced a new lineup of postseason hardware with two major additions that will surely stir debate as we progress through the upcoming Eastern and Western Conference finals.

The league added Conference Finals MVP trophies, named after Magic Johnson (Western Conference) and Larry Bird (Eastern Conference), two of the main players responsible in the 1980s for lifting the popularity of the NBA.

You should also keep an eye out our upcoming NBA Finals MVP Ladder, which drops in June:

Don’t sleep on Brown’s ability to heat up in a hurry. Back on Jan. 1, the 2021 All-Star posted a career-high 50 points against the Orlando Magic, which included 24 points in the fourth quarter and overtime in becoming the seventh player in Celtics’ history to reach the 50-point mark. Miami can’t just key in on Jayson Tatum in the Eastern Conference finals because the small forward has enough chemistry with Brown to routinely find the shooting guard for highlight-reel connections. Brown gobbled up a total of seven steals in the Eastern Conference semifinals against the Milwaukee Bucks, and he’s totaled 17 thefts in 11 playoff outings in 2022.

Tatum, Brown connect on and-1 oop

Interestingly, the Heat have finished with five different scoring leaders in their 11 postseason outings, but what you need to understand is the fact that playoff-mode Butler is a different beast. Don’t think so? Well, compare the man’s regular-season numbers to what he’s doing in the playoffs. Butler has increased his scoring average by 7.3 points, rebounds by 1.7, and his steals from 1.65 per game in the regular season to 2.1 in the playoffs. The six-time All-Star also boosted his shooting percentages from 43% on field goals in the regular season to 52.5% in the postseason and his 3-point accuracy from 23.3% to 36.4%.

Jimmy Butler takes over, Heat close out 76ers in Game 6

You can expect Miami to pour every resource into stopping Tatum, which might prove fruitless based off the 46-point performance the young star produced in Game 6 against the Milwaukee Bucks in the conference semifinals. Tatum’s point total tied for the second-most by a Celtic in an elimination game, according to StatMuse. Tatum simply cuts through defenses like hot butter. Even two-time Kia MVP Giannis Antetokounmpo took notice, and wished Tatum well after Boston knocked Milwaukee out of the playoffs. Tatum scored 17 of his 23 points in Game 7 against the Bucks in the opening half and started off the game shooting 5-for-5 from deep.

Golden State has emerged victorious in 20 of its last 22 postseason series, and Curry is one of the main reasons. Curry averaged 26 points, 4.8 rebounds, and 5.8 assists in the Western Conference semifinals against Memphis, hitting 41.3% from the field, 32.9% from range, and 89.2% from the free-throw line. An eight-time All-Star, Curry closed out the conference semis with his 31st career 20-plus point postseason outing, routine hitting all the big shots we’ve come to expect from the future Hall of Famer. Curry has drilled at least one 3-pointer in each of Golden State’s 10 postseason contests, which extends his NBA playoff record 3-point streak to 122 consecutive games, according to Elias Sports Bureau.

At 23 years old, Doncic is the second-youngest player in NBA playoff history to rack up 35 points and 10 rebounds in a Game 7, after putting together his 14th career 30-point postseason outing in Dallas’ closeout victory Sunday over the Phoenix Suns. You can expect plenty or sick crossovers from the three-time All-Star against the Warriors in the conference finals, such as the one he pulled off on Phoenix’s Cameron Johnson that just screams “viral content.” Even the greatest player in Mavericks franchise history, Dirk Nowitzki, made sure to pay homage to Doncic on the heels of his lights-out showing in Dallas’ Game 7 annihilation of the Suns.

How will Warriors attempt to defend Luka?

The Warriors head back to the Western Conference finals for the first time since 2019, and Thompson appears to be rounding back into form as one of the league’s deadliest shooters† The five-time All-Star averaged 18.5 points, 5.0 rebounds, and 1.2 steals in the conference semis, and closed out the series with his 15th career postseason out with 30 points or more. Thompson has drained eight 3-pointers in a game on four occasions, tying Ray Allen, Curry, and Damian Lillard for the most in NBA history. Thompson’s Game 6 reputation is legit, too. He’s averaged 28.1 points, hitting 6.1 3-pointers per game the last seven times he’s played in a Game 6.

Michael C. Wright is a senior writer for NBA.com. You can email him herefind his archive here and follow him on Twitter†

The views on this page do not necessarily reflect the views of the NBA, its clubs or Turner Broadcasting.