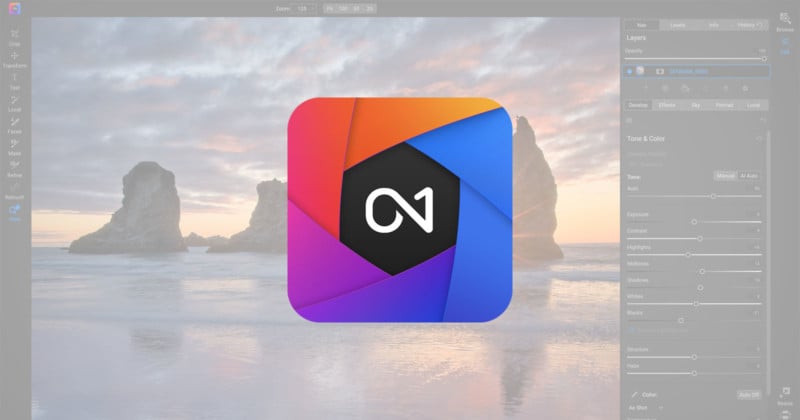 ON1’s Photo RAW application is getting a major update next month. In addition to several feature enhancements, the company is also folding its Resize AI tool fully into the Photo RAW software.

Last September, ON1 integrated NoNoise AI into Photo RAW along with its Sky Swap AI. Resize AI was announced in mid-March and is powered by what ON1 says is a state-of-the-art neural network that enlarges photos with realistic detail to produce outstanding results. That highly-touted feature will soon also be integrated into ON1’s Photo RAW software in what appears to be an attempt to compete more fully and directly with Adobe Lightroom.

ON1 is positioning the update that is coming this June as a way to simplify and streamline the photo editing process. Once ON1 Photo RAW 2022.5 launches, photographers will no longer have to go between multiple apps in order to achieve the best results.

In addition to the folding Resize AI into the software, ON1 says Photo RAW is also getting a group of other major updates: batch upscaling, enhanced NoNoise AI in non-RAW files, new and improved lens corrections, better masks in SkySwap AI, and more camera support.

Photo RAW will soon be able to open multiple photos at once and will be able to adjust and sync settings across those multiple photos, upscale them all, and export them to a specific destination. This particular feature makes Photo RAW more in line with what is expected out of Lightroom.

NoNoise AI will soon work better with non-RAW photos such as JPEG, TIFF, or PSD files. The company says that the results have been “much improved” with quality that closely matches what can be produced with RAWs.

ON1 says that it is improving lens corrections with its new LensMatch system. LensMatch automatically detects and removes distortion when shooting RAW, which the company says does away with the need for external lens profiles for many users. Lens correction can also remember user manual profile adjustments so they can be used as the defaults for a lens in the future.

Photo RAW will also get better masks with Sky Swap AI, specifically when it comes to trees and white in the sky. Finally, ON1 will add support for the Canon EOS R5C, Panasonic Lumix GH6, OM System OM-1, Leica M11, Fujifilm X-T30 II, and the Nikon Z9.

ON1 plans to launch update 2022.5 sometime in June for free to all owners of ON1 Photo RAW 2022. The software can be purchased on a perpetual license for $100 or as a subscription for $8 a month or $90 a year. Older perpetual versions can be upgraded for $80†

The company plans to reveal more details on the upcoming update — likely examples of the new features — in the coming weeks.