Arsenal defender Granit Xhaka criticized his team-mates after their performance in Monday’s 2-0 defeat at Newcastle, saying: “If you’re nervous stay at home.”

The midfielder felt his side’s display showed they could not handle the pressure of chasing a top-four spot.

Victory would have moved them above Tottenham into the Champions League places with one game remaining.

“If someone isn’t ready for this game, stay at home,” he said.

“It doesn’t matter your age. If you’re nervous, stay on the bench or stay at home. You need people to come here and play. It’s one of the most important games for us. We’re feeling very disappointed for the people who came over here.”

“He’s having a right dig at players in the dressing room,” Neville said.

“I hope he wasn’t having a go at these young players. He has been a disgrace at times, getting sent off etcetera. He has left it up in the air there.”

The result means Arsenal must beat Everton at home on Sunday (16:00 BST) and hope Tottenham – two points ahead and with a much better goal difference – lose at relegated Norwich.

“We wanted to have a big game but it didn’t happen,” Xhaka told BBC Sport.

“People always speak about leaders. We’re not playing tennis, we’re playing football. If someone is not ready for this pressure, stay at home.

“They were running us over from the first minute to the 96th. When you play like this, you don’t deserve to play in the Champions League.

Ben White’s own goal gave Newcastle the lead early in the second half before Bruno Guimaraes added a deserved second late on.

“If Tottenham lose and we win, you never know in football,” added Xhaka.

“We have to hope. Before the game everything was in our hands. It’s a totally different game now.” 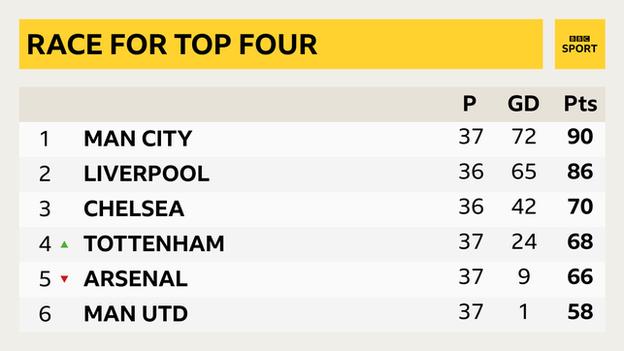 The defeat was the Gunners’ sixth in 11 Premier League games – coming four days after they lost 3-0 at Tottenham – and boss Mikel Arteta accepted Newcastle were better than his side in every department.

“Newcastle deserved to win by a mile,” he said. “It’s a really difficult one to accept.

“Newcastle were 100 times better than us. In every department, you have to earn the right to play and we didn’t do it.

“We have to put our head down and accept the performance was nowhere near the standard required for the Champions League.

“I am incredibly disappointed. It’s a very painful one. It was in our hands and today it’s not in our hands. We have to beat Everton and wait for Norwich to beat Spurs. There’s always a tiny chance in football.

‘Newcastle are a massive club with massive ambitions’

After the final whistle there were scenes of jubilation in the St James’ Park stands, which remained full as supporters stayed behind to applaud the Newcastle players and coaching staff on their lap of honour.

It is an incredible turnaround for a side who were in the relegation zone when the Saudi Arabian-backed £305m takeover was completed on 7 October.

Signings made in the January transfer window have certainly helped, but manager Eddie Howe has also transformed the performances of several players he inherited.

“It’s been a brilliant thing to be part of [Newcastle’s form over the second half of the season],” Howe told Sky Sports. “We’ve done it through team spirit and unity.

“We’ll remain very calm in this moment because it’s a brilliant win but that’s all it is. We have to work to improve in the summer.

“We’re a massive club with big ambitions but my job is to focus on how we do it rather than talk.”