NASA, Boeing, and ULA teams, along with international partners, have finished the agency Flight Readiness Review (FRR) ahead of the Orbital Flight Test 2 (OFT-2) for Boeing’s Starliner spacecraft. Following the valve issues that scrubbed OFT-2’s launch attempt in August of 2021 and the communication and software issues that caused Boeing’s first OFT mission to end prematurely, Boeing hopes to demonstrate the physical and software changes made to the spacecraft on this mission.

Despite being uncrewed, OFT-2 is an end-to-end simulation of a crewed launch–including arming the abort system. Lifting off from Space Launch Complex 41 at the Cape Canaveral Space Force Station, Starliner will be placed into a 72 km x 181 km sub-orbital trajectory by United Launch Alliance’s Atlas V rocket. Starliner will then undergo several phasing burns to raise its orbit to that of the International Space Station.

Starliner will then dock to the ISS’ Harmony forward port, where it’ll remain docked for approximately five days for a total mission length of five-to-eight days. This will mark the first time that NASA’s docking system will be used, as Dragon’s docking system was designed in-house. Starliner will then undock, perform several phasing burns, and reenter the Earth’s atmosphere for a landing in White Sands Missile Range on May 25, 2022.

OFT-2 will be the third flight of the Starliner spacecraft; its first flight and second flights were the pad abort test and first OFT mission, respectively.

Changes to the Starliner Spacecraft and Procedures

On August 3, 2021, Boeing teams started counting down toward the launch of Starliner. Early in the countdown, engineers noticed that 13 valves on Starliner’s service module were in the incorrect configuration and were stuck. 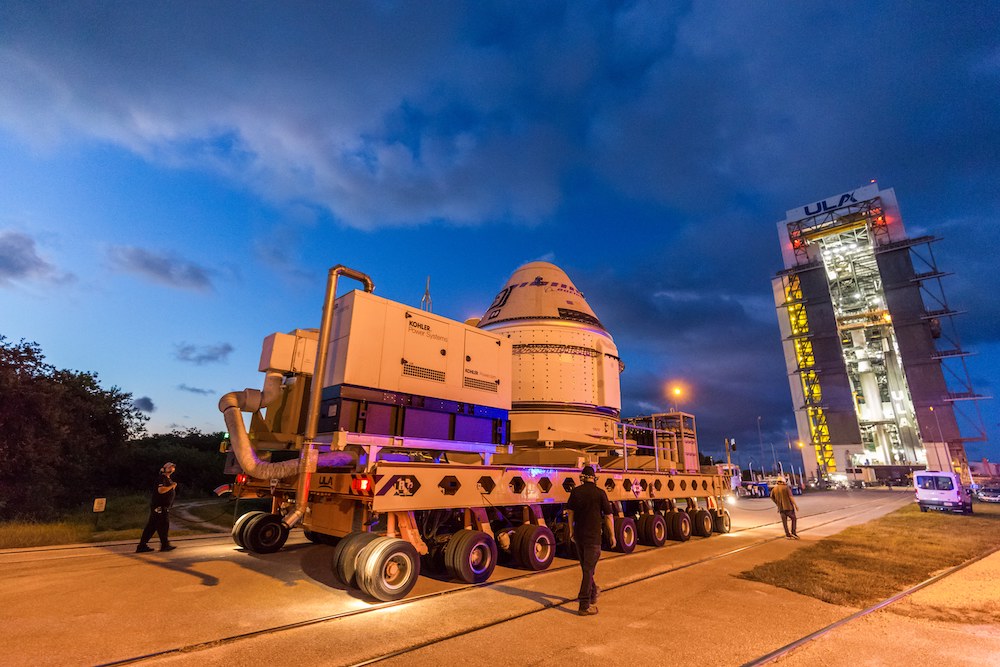 Starliner being rolled to the VIF (Credit: Boeing Space)

After rolling back to ULA’s Vertical Integration Facility, Boeing engineers were able to command nine of the valves to open after conducting mechanical, electrical, and thermal cycling, but were unsuccessful on the other valves.

Starliner then moved to Boeing’s Commercial Crew and Cargo Processing Facility where they removed the service module and sent it to their White Sands Test Facility in New Mexico for additional valve testing.

Upon tearing the valves apart, it was noted that moisture in the air reacted with nitrogen tetroxide creating nitric acid, which then reacted with the aluminum housing of the valve creating corrosion products–most prominently aluminum nitrate. These products then got in the way of the valve’s motion, causing the valves to get stuck. Boeing was able to recreate this interaction when exposing valves to similar temperature and humidity values ​​to those found in Florida.

For the OFT-2 mission, Boeing has made no changes to the valves themselves; rather, Boeing has created a purge system: gaseous nitrogen is used to flush out all moisture from the valves. Boeing also sealed a moisture path in the electrical connectors to the valve, which Boeing believed could have allowed moisture into the valve.

Additionally, Starliner now gets fueled with nitrogen tetroxide and oxygen later, leaving less time for the fuel to react with moisture. Finally, Boeing has added cycling of the valves every two-to-five days once fueled, to ensure the valves remain operational. 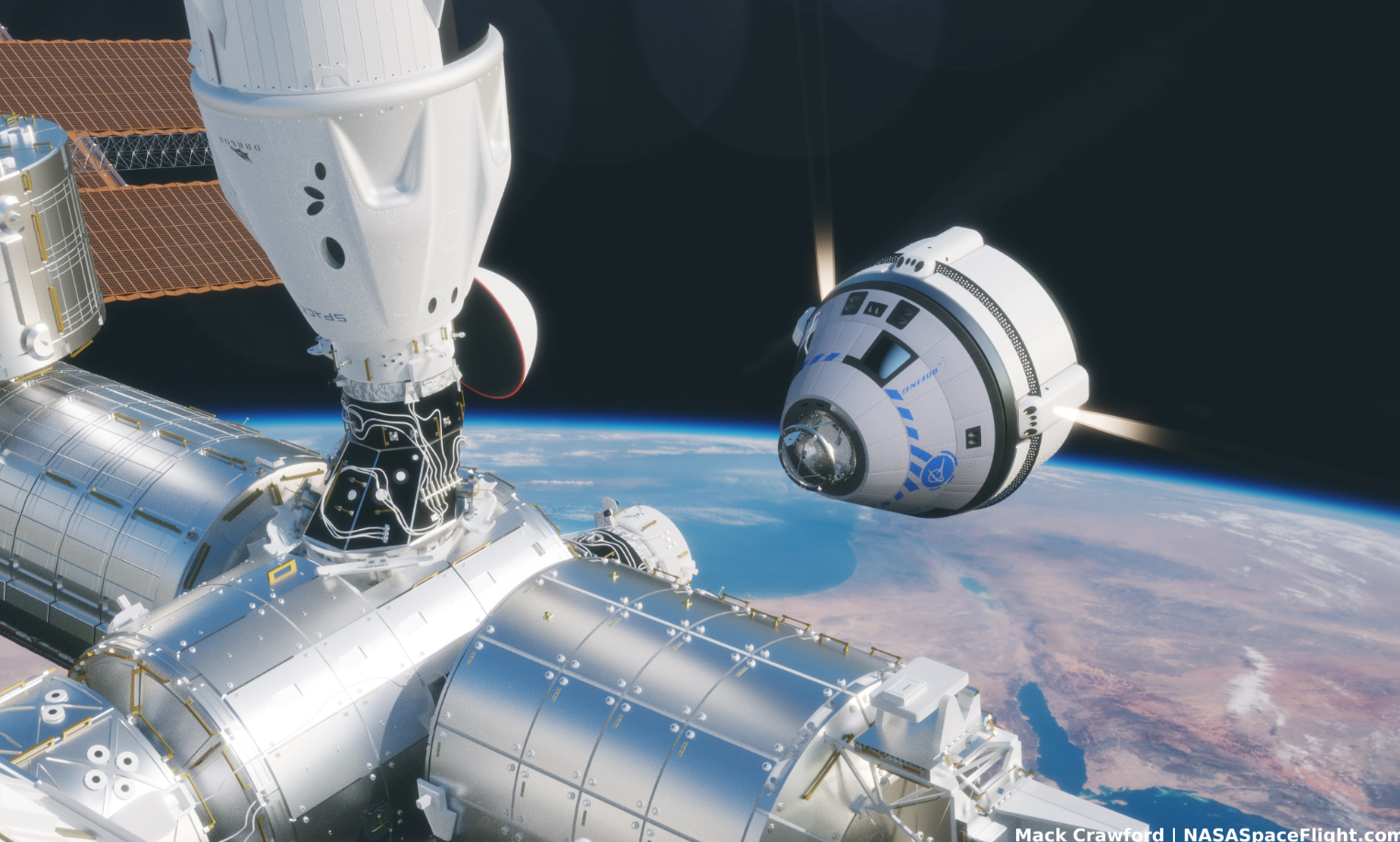 Boeing’s Starliner approaches PMA-2/IDA-2 on its OFT-2 mission while a SpaceX Crew Dragon is docked to PMA-3/IDA-3. (Credit: Mack Crawford for NSF/L2)

Long term, Boeing is looking into making changes to the valves themselves–possibly including changing the aluminum housing for another material. A decision will be made on a long-term solution in the coming months, but the aforementioned mitigations are acceptable for upcoming flights.

Starliner Spacecraft 2 and SM4 have both completed all testing successfully–both as individual components and as a combined spacecraft.

These mitigations have now been approved by all Boeing and NASA teams after the FRR ended on May 11. Teams deemed that Starliner, Atlas V, and the ISS are all ready to support OFT-2.

The flight readiness review being the biggest and most important “go” for launch, ULA, NASA, and Boeing are now targeting May 19 at 6:54 PM EDT for the launch of OFT-2, with docking scheduled for ~6:57 PM EDT on May 20.

As with all FRRs, teams discussed in-depth technical assessments of all aspects of the vehicle, closing out most remaining items. NASA’s Commercial Crew manager Steve Stitch described the FRR as “very clean,” with the only remaining open items being standard open items at this point in the review. Teams need to finalize landing site readiness and inspect hardware during final rollouts.

After launch, Boeing has 15 items that were not demonstrated on the first OFT mission. They would like to demonstrate the ability to target the correct portion of the ISS, retreat from the ISS on command, and rendezvous and docking.

The next major milestone for the OFT-2 mission will be the Launch Readiness Review (LRR), which will take place on May 17. Following this review, OFT-2 will be ready to launch to the ISS pending weather.

The Starliner Spacecraft is launching atop ULA’s Atlas V N22 rocket. The “N22” is the configuration of Atlas on this mission: no fairing (hence the N), 2 Aerojet Rocketdyne AJ-60 SRBs strapped onto the first stage, and 2 RL-10A-4-2 engines on the Centaur second stage. 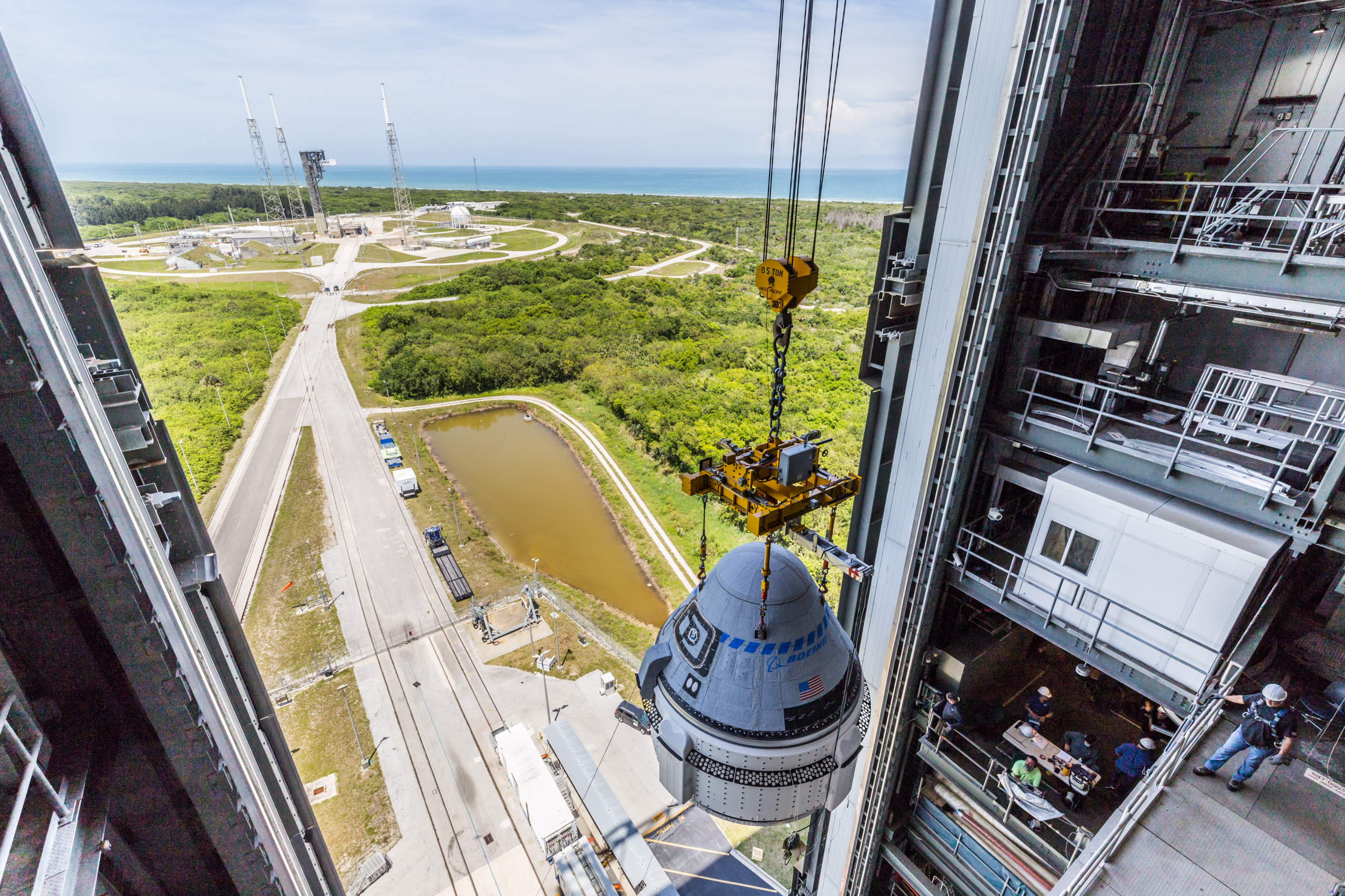 Starliner being lifted onto the Atlas V (Credit: Boeing Space)

The Atlas V Common Core Booster (CCB) being used on this mission is AV-085, which arrived at ULA’s VIF on April 20, 2022. On April 26, the second stage of the Atlas V was lifted atop the CCB and the SRBs were mounted to the first stage.

On May 4, Boeing rolled Starliner from the Commercial Crew and Cargo Processing Facility to ULA’s VIF, where it was mounted on top of the Atlas V.

Starliner will be loaded with 500 pounds of cargo to bring to the ISS–mostly food with some small EVA components. Astronauts will unload this cargo and replace it with 600 pounds of nitrogen-oxygen recharge tanks to take down. Once on the ground, the three tanks will be refurbished and then flow again.

(Lead image: the Centaur upper stage, with Starliner on board, separates from the Atlas V first stage. Credit: Mack Crawford for NSF/L2)